With the Dunkel languishing, I needed something to drink, so time for another porter.  By now I'd read Ray Daniels' "Designing Great Beers."  Vegas Home Brew has a nice little selection of herbs and loving licorice, I decided to add some root to the boil for this batch of porter.  I actually did a grain and attenuation calculation, thanks to the Android HomeBrew calculator, plus I found the Brew Timer app and entered my brewing schedule.  Later, I found the Brewing Assistant app and entered a couple recipes, but haven't actually tried using its timer.  Based on the calculations and a target ABV of 7%, I bounced up the quantity of pale ale and specialty malts and the amount of honey.

In June, Steve had given me an article, the time I was in with the Dunkel, that explained how to deal with the Vegas heat when using top fermenting yeasts.  Simple magic with evaporation, coolers and ice packs till you get to the temperature you want.  After the mash, I decided to use a collander for sparging, as the strainer wasn't big enough to hold all the grains.  The collander almost wasn't either but still was adequate.  But trying to do all this with my assortment of pots was getting difficult.  But the evaporation technique kept the fermenting jugs at a nice solid 70 degrees, with the house AC set to 80 or so.

I bottled it on 6/21 after only a week of fermenting.  I put the bottles in the cooler too with ice packs on either end of the cooler and covered the top of the bottles with a wet towel. This brew was finally ready for drinking on July 12th.  The licorice didn't come through as strong as I expected, but it was only in the boil for the last 5 minutes.  Still a fabulous result. 7.59% ABV, thick creamy head, nice mouthfeel, very malty.  I gave my daughter's fiance a six pack for a party they were having and he only let his guests share one bottle.  Since other people were going to see my brews, I came up with the Blind Dog name, after our older cocker, Bailey, who was blind in one eye, passed away the previous October.  I also named this brew after him...Bailey's Honey Porter.

Just hope Big Dog's doesn't think I was copying them.
Here's the original picture of Bailey. 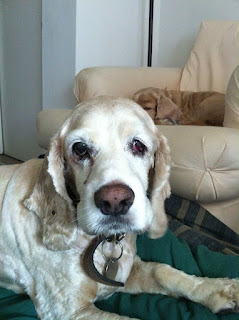