So off on my quest for truth and the meaning of life, I printed out one of my India Spiced APA labels, stuck it on a bottle, filled my hydration pack with Gatorade, stuffed the APA bottle and an ice pack into the hydration pack and pedaled the 14 miles to Vegas Homebrew for answers.

There were a couple of customers there and Steve was explaining the extra equipment needed for all grain brewing to one.  Right after I walked in, another guy came in with a cooler.  We both set our bottles down on the counter.  His still had the Sam Adams label on it.  Guess he missed the part in the book about soaking off the labels for sanitary reasons.  Steve rang the customer up and was happy to see some cold brews come in for a change.  He broke out the cups and I explained I wanted his opinion on whether I should enter it for best use of hops.  He quickly responded as he started pouring, that the judges are really looking to be knocked over by the smell of hops and that he should have already started smelling them at arm's length during the pour.  So that's the bad news.
The we talked about the style I was going for and he seemed to think that an APA was a pretty close fit.  So that was the good news...in addition to the fact that now I had one more bottle of my APA at home that I could drink.
The other guy broke out his sample and Steve explained that he was a newb and this was his first brew.  Steve was the first to pick up the metallic taste in it.  He said that it was from the can that the LME came in and that it couldn't be helped.  Also a bit of oxidation taste.  I'm not sure if he thought that was also a result of using LME.  I asked the guy next to me if he ever tasted canned spinach; I don't know how Popeye handles it, but talk about the metallic taste of a can!  This brew wasn't anywhere near as bad.  Actually very drinkable.
I got into a discussion with one of the other guys about a new malt on the shelf - Crisp Black - apparently a black patent malt that they have debittered to some extent, so you still get the color and a bit of the roasted flavor without all the bitterness.  He said he was all set to brew the White House Honey Porter and had all the ingredients lined up and realized he didn't have any yeast.  He picked up good old Safaele S-04, although the recipe calls for Windsor which was right next to it.  We both agreed that Safaele was really reliable.  He had also converted the recipe to all-grain.  He had gotten the recipe by signing the FOIA petition.  The White House actually emailed him both recipes.  Pretty funny.  I wonder how many others are doing the same.  He wanted it ready for Election Day.  I think he has plenty of time.
When Steve rang him up, he brought up the SNAFU meeting tomorrow night.  The guy had joined ages ago and never picked up his card.  So he didn't get his discount.  Aces and Ales is going to open up another place at Sahara and Rainbow...pretty close to Big Dogs.  Supposedly they are going to make it a brew pub too.  Steve said he was hoping that one of the brewers meeting held at the current location would move out here to be closer to us all on the north and west part of town.  Steve also asked to keep my bottle with the label, so now Blind Dog Brewing is proudly on display in Vegas Home Brew's counter display. 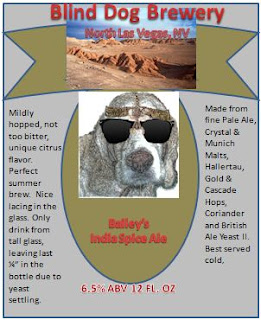