So, at work we have this project called ACES which is a package based software implementation.  However, the client decided to hack the crap out of the package to shoehorn it into their business.  It has been going on for 7 years. We haven't implemented yet and we are on Work Pack 23 - that's 23 software releases of modifications to the base package just in the last two years.  Looks possible we will go live with it next month such as it is.  In honor of this ridiculous endeavor, I started on a recipe for an Irish Red Ale I called ACES Anniversary Ale.  Each batch took on another work pack number, starting with WP-01.  There really isn't any anniversary, but I figured I was brewing it for the go live date.


The first batch had a bit too much crystal malts. I was shooting for an Imperial Irish Ale.  Although you could see the reddish tint when held up to a bright light, it appeared fairly dark brown.  I had dry hopped it with a quarter ounce each of Simcoe and Williamette pellets, so it had a nice bitter finish, but not too bad.  It came out pretty malty, and the ABV wasn't as high as expected.  I looked at the specs for the Irish Ale yeast and realized it only attenuates to 70%, so it left behind a lot of sugar and resulted in 5.6% ABV instead of 8%.


WP-02 was brewed about a month later and I reduced some of the crystal, but kept the flaked barley and Carared malt.  Still came out a bit dark, but the red was showing better.  ABV came out about the same.


WP-03 was very different, took out all the Munich and extra crystal, exc for the Carared.  I screwed up the mash with too high of temperature of strike water and didn't detect it soon enough.  I was doing a single infusion mash and the temperature gradients in the tun were pretty wide.  I only managed to get 3.5% out of it.  So as a hail mary, I threw in a bottle of Jameson's to get it over 5%.  I skipped the dry hopping this time.  I popped a bottle after a week and thought that if it didn't get better, I'd dump the lot.

After another week and a half, it really matured.  Over two weeks after bottling it was actually damn good enough bring it in to work to distribute.  I called it WP-03 Hot Fix as a tribute to the Jameson's fix. 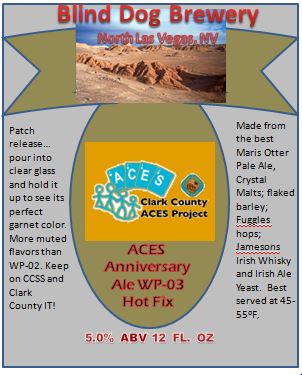 Posted by Blind Dog Brewery at 1:34 PM No comments: