At one of the SNAFU meetings, since Aces and Ales is nice enough to let us host it there, drink our homebrews and discount our orders, I felt that I should at least patronize Aces and Ales by buying something from their vast beer and ale menu.  My eyes landed on a Farmer's Ale aka Saison, which sounded interesting.  It certainly didn't disappoint, mildly hopped, very malty, slightly cloudy, firm head, moderate mouthfeel.  I knew I had to add a Saison to my recipe list.  Especially since it used a hot weather yeast - White Labs WLP565.  This brew was dry hopped also, this time with 4.8% Goldings.

I found a recipe on www.beersmith.com that fit the bill, although I'm thinking now I should have left the spices out and kept it generic.  The recipe called for ginger, peppercorns and anise to be added at the end of the boil.  After reducing the recipe to fit my 2 gallon capacity, my scale couldn't even measure the tiny subgram measurements of the anise and ginger, so I may have added a bit more than needed.  I picked up some Irish Moss too to help clarify it a bit more than the isinglass alone would do.  Added some lactic acid per the recipe and given that I didn't start the mash as low in temperature as usual, that may have helped lower the pH to where it needed to be.  Although I've never paid any attention to pH so far.  Probably should since we have a resin based water softener that is supposed to take out the carbonates, calcium and magnesium.  But until I actually get it tested, there's no sense trying to improve it one way or the other.

Even at 70 degrees, the fermentation took off well.

After seven days and things calming down, I reracked it.   Tasted a bit weird and I wonder if I didn't over spice it.  For one of the jugs, I only had a half inch hose and an airlock to put it on, instead of a 3/8" hose and a jug cap with a hole in it.  So when I figured I could just use the airlock without the hose for the secondary, I tried to pull the hose off the airlock.  Wouldn't budge.  So instead of just cutting off the end of the hose, I just pulled harder.  Pulled the inside right out of the airlock..SNAP.  So for that jug I just used a solid cap and opened it every now and then to let out the pressure.

Was down in Henderson this week and there's another homebrew store down there called U Bottle It.  I'd wanted to drop in, since the owner, Heather, also attends our SNAFU meetings.  Very nice store.  They have a couple Ruby Street Brewery 10 gallon rigs for sale that are really sweet.  http://www.rubystreetbrewing.com/tp40/page.asp?id=263057

So I picked up another airlock, 3/8" tubing and another jug cap with a hole in it.  Heather graciously gave me the grand tour and she's done some really smart things with her specialty grain packaging.  Took all those parts back and replaced the solid cap.  Have kept it at 80-85 degrees in the secondary, and it has been working well..

Couple more days to bottle it.﻿
While I've been waiting, I worked up the labels for the Dunkel.  Since our now older dog, Brooke is also going blind, I used her as the model.  She's wearing the latest fashion in Lederhosen. 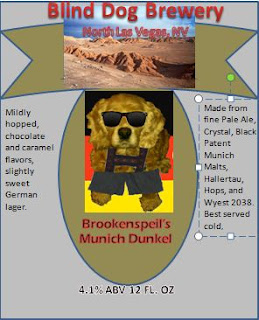 Here she really is.  Bailey had glaucoma and went blind in one eye within hours.  Brooke has retinal atrophy, so she's slowly going blind in both, but you'd never know it. 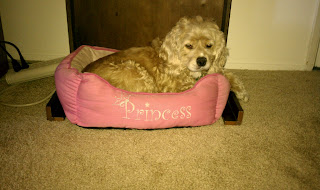